What follows is an ancient Turkish henna ritual, whose symbolism later morphed into the modern wedding ritual, where henna is painted on a bride’s hands and feet:

“Henna-night is a very old ritual, with a history that some believe goes back to the time of prophet Muhammad. According to lore, in the era of the religious wars, Muhammad gathered his followers on the night before the attack. While praying together for victory in Jihad, he would put some henna, an organic dye with a reddish color, into the palms of the soldiers. Henna’s red color symbolized blood and coloring the palms suggested that the warriors were ready to sacrifice their blood and lives in the name of God. According to the myth, this war ritual eventually became a marriage ritual in which the bride symbolically leaves her identity as daughter, centered in her mother’s house, and enters into a new life stage as adult wife whose life is centered around her husband’s family.”

As in the war ritual, the red henna symbolizes the virgin bride’s blood, as well as her transformation from girl to woman. 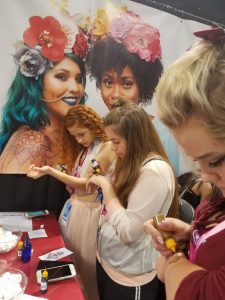 Henna—More Than A Tattoo, It’s Art!

What Does Your Tattoo Mean To You?