When I first heard about the jagua fruit, as used by the indigenous people of the Amazon jungle, I immediately assumed it would be associated with magical and mystical beliefs. After all, smearing the juice on the body turns it black! I went looking for information and figured out very quickly that I was not wrong. Here are a couple of passages from the chapter titled Jagua Magic from my book, Jagua, A Journey into Body Art from the Amazon. I will continue to post occasional juicy bits from this chapter!

To Acquire Strength
Peruvian shaman and painter Pablo Amaringo says that the caballo piripiri plant is ingested to acquire great strength. To do so, the plant must be combined in equal parts with the jagua fruit and poured over the body. One must then avoid sun, salt, sweets, garlic, liquor, and pig fat for eight days while also abstaining from sex, or socializing with anyone who is sexually active.

Preparing for War
Painting oneself with the fruit of the jagua tree was an integral part of pre-attack rituals of many indigenous people of the Amazon, for the black designs on the skin helped create an appearance of fierceness. It was usually the women who painted the men on the face and body with strong wide stripes, as well as with broken, wavy, and narrower lines complemented by dots to create an imposing and bone-chilling effect upon the people being raided. In addition, it conferred upon the Indians chameleon-esque powers, in that they were able to remain camouflaged among the leaves and trees before bounding into the open in order to surprise their unsuspecting victims in full blue-black, frightening, war-painted splendor.

For example, males in the Sapara community of central-eastern Ecuador paint their faces with jagua in order to look like tigers—with two stripes on the chin, two on either side of the mouth (like whiskers), two tracing the eyes to the hairline, and four on the forehead. This design is specifically meant to protect them and give them strength.

What Did You Get For Christmas? 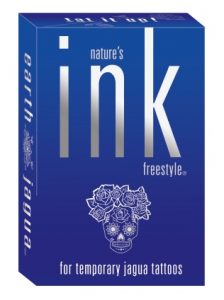